Dynamic cooling experiments on a synthetic martian lava reveal a history quite similar to that of pāhoehoe flows on Earth.

The Red Planet is home to many mafic volcanic terrains similar to those on Earth, so the idea that meteorite Y-980459 was a lava flow is very reasonable. However, the type of flow and the specifics of its cooling had not been examined experimentally (image: NASA)

Experimenting with the 1-atm gas-mixing furnace in the experimental petrology lab of the University of Hawaii, I re-created different cooling scenarios for this martian lava, which is based on the bulk composition of meteorite Yamato 980459. At least two stages of cooling were necessary to reproduce the textures and compositions of phases in the meteorite. 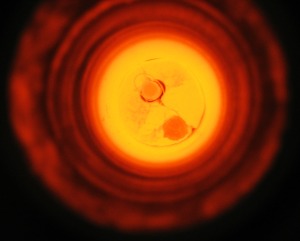 Peering up into the 1-atm DelTech furnace, where a bead of experimental martian basalt hangs on the right, next to an oxygen and temperature sensor at left. 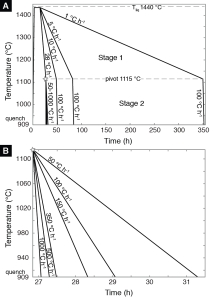 It is likely that pyroxene and olivine phenocrysts began crystallizing at depth and grew further upon eruption, at ~10 °C h-1 . Subsequent crystallization of groundmass pyroxene and olivine would have occurred at cooling rates of ~100 °C h-1. These cooling rates are consistent with different depths in a pāhoehoe-like lava flow. High resolution remote sensing imagery from Mars strongly suggests the presence of large, sheet-like flows with inflated margins, making this conclusion plausible.

Experimentally produced pyroxene and olivine crystals (diamonds) reproduce the compositions of those phases in the meteorite (circles). 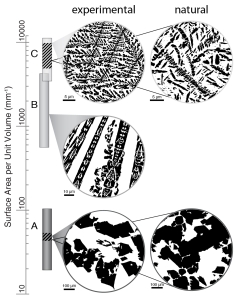 The surface area per unit volume of different pyroxene crystal populations is a quantitative textural parameter that correlates with cooling rate.

A summary of how the Y-980459 lava flow likely formed and cooled, emphasizing the good probability of sampling.